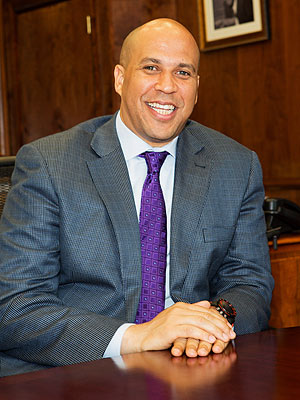 The country watched in disbelief as Hurricane Sandy menaced the East Coast and caused widespread flooding, power outages, and unimaginable damage. In the storm’s aftermath, many heroes have emerged from all walks of life to help those who have suffered tremendously from the storm. One of those heroes happens to be Newark, N.J. Mayor Cory Booker.

It’s safe to say that many people view politicians with a healthy amount of skepticism. While we shy away from making political statements, we have to applaud the resilience and passion Mayor Booker has shown after the hurricane.

When Hurricane Sandy hit the state of New Jersey, it left behind a ruined Jersey shore and millions without power. No stranger to social media before the storm, Mayor Booker asked his citizens to message him on Twitter with their problems. In a surprise move to many, he answered directly to each response, checked up on those in need, and provided timely updates on power outages.  Not only that, he delivered food and supplies, invited people without power to watch DVDs at his house, and really just worked tirelessly to provide as much comfort as he could to his constituents.

Even before Hurricane Sandy, Mayor Booker was known as a hands-on leader. During a blizzard of 2010, when a storm dumped more than two feet of snow on Newark, he helped to shovel driveways. Earlier this year, he rescued his next-door neighbor from a burning building. Regardless of personal political beliefs, you can’t deny that Mayor Booker cares about his community.
Leaders can learn from Mayor Booker, on not just the power of social media, but also how to be an approachable leader. As the leader of your company, it is your duty to be as transparent as you can with your direct reports.

Many effective leaders are both respected and liked by others because they are accessible to others at all levels in their organizations. They also do things that indicate that they care about others. Successful leaders can be depended upon to do what they say they will do and to do it well.

Think a bit about how others see you. Do you believe you’re approachable? Perhaps you are so focused on your own tasks that you don’t even notice other people around you who may want to get to know you or learn something from you. If this is important to you, you will need a way to show genuine interest and caring for a wider range of your work colleagues.

When you’re considered an approachable leader, people trust that you will be accessible and helpful if they come to you with problems or concerns. They count on you to do your best, no matter the situation.