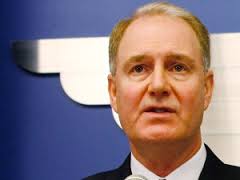 Gary Kelly wants to impress you. Sure, he wants you to pick Southwest Airlines over the competition. But there is another aspect in his life that he desperately seeks approval – his Halloween costume.

Kelly is not only the Southwest Airlines CEO, President, and Chairman but he is also a once-a-year Halloween superstar.

Can you image walking into the office and running into this lovely face? Spooky!

Over the years, Kelly has dressed up as Gene Simmons from KISS, Captain Jack Sparrow, Edna Turnblad, and Billy Gibbons from ZZ Top, according to Southwest.com. Halloween is a big deal at Southwest Airlines – a majority of employees participate in costume contests and will decorate their stations at airports.We can only imagine what Kelly will be for Halloween this year. Iron Man? A vampire? Lady GaGa? We’ll just have to wait and see. He has stated he will sacrifice for art – within reason.

Kelly’s attitude toward Halloween is a perfect example of his desire to create a different kind of corporate culture. While some CEOs stay in their massive office and hardly ever crack a smile, Kelly appears to be anywhere and everywhere at any given time interacting with all ranks of employees.

As Chief Executive of Southwest Airlines, Gary Kelly maintains his focus on three important areas for the company: low cost, customer service, and its people.

Bags fly free. Those three little words helped Southwest Airlines fly above the competition. Though analysts dubbed the Southwest campaign as irresponsible and naïve, it proved to be a success.

According to reports, Southwest Airlines has grabbed nearly $1 billion in annual market share, which is in part due to its no-fee baggage policy.

Bags fly free is now a big part of the Southwest marketing campaign. Instead of using paid actors, Southwest utilizes its own employees for nationwide television and print commercials. Now that is one way to raise employee morale!

At Southwest Airlines, employees have the freedom to be creative, dress casually (and with style on Halloween), and have fun on the job, according to Southwest.com. It should come to no surprise that about 80 percent of the Southwest staff said they work at Southwest because of the culture. Southwest also does good business. The company has been profitable ever since its first full year – a rarity in the airline industry. What leaders can take from Kelly is to showcase a bit of your own personality. Just because you are the CEO or upper management, doesn’t mean you can’t have a little fun. Obviously, a leader can’t go too overboard. However, if you feel the urge to dress up as a member of KISS for Halloween, what’s holding you back?