A refreshing take on leadership: Indra Nooyi, CEO of PepsiCo 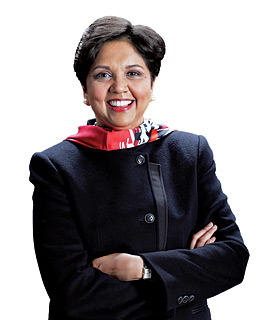 Sometimes she’ll patrol the office barefoot. Other days she’ll sing in the halls. These are not typical characteristics found in employees – let alone the CEO. However, PepsiCo CEO Indra Nooyi isn’t afraid to showcase a bit of own personality in her highly public role.

She may sing and laugh at the office, but keep in mind this India-born leader takes a hard-nosed approach to business. She regularly makes Forbes and Fortune lists as one of the most powerful business leaders in the world. She is also known for her aggressive deal making and the operator behind Pepsi’s most strategic moves.

Nooyi is fully aware of the company’s bottom line but she is also focused on operating a business that has a positive impact on society. Not long after she was named CEO of PepsiCo, she established the corporate mission, “Performance with Purpose.”

This approach includes three components: human sustainability (an increase in the nutrition of products), environmental sustainability (operating responsibly), workforce development (creating a place where employees feel they can maintain both a job and a life).

In an interview with The Boston Consulting Group, Nooyi was asked about her approach to leadership and also the future of leadership as a whole. She said there are several ways in which the role of the CEO will change.

“Aspiring CEOs have to understand they are signing up for a lot more than CEOs did in the 1970s, 1980s, 1990s, and even four or five years ago,” she said in the interview.

Here are a few tidbits of her advice:

Focus on the long term: Nooyi stated the notion of focusing on short-term earnings is a thing of the past.

Think globally and act locally: Businesses that have customers in different markets across the world need to tailor products, business models, and people practices to each market.

Become more open-minded: CEOs have to become learning CEOs, she said. They need to continue to adopt the next leadership principles and learn about technology and the younger generations.

Nooyi’s is an example of leader who has a keen business sense but also operates with a moral compass. She is fully aware of her actions and believes the way a CEO projects himself or herself sets the mood for the entire company.

“You need to look at the employee and say, ‘I value you as a person. I know that you have a life beyond PepsiCo, and I’m going to respect you for your entire life, not just treat you as employee number 4,567,’” she stated.

What are your thoughts about Indra Nooyi’s leadership traits?